Am I an Alcoholic? Tips on How to Know

“Am I an alcoholic???” If you get to the point where you have to ask this question about yourself or a loved one, chances are there is a problem. Whoever the person is in question may or may not technically be an “alcoholic” but there is certainly an issue with substance abuse that needs to be addressed. If it wasn’t a problem, then there would be no need to even ask if there were one.

Sometimes people think that the only time it is necessary to quit drinking is when a person is completely addicted but, truth be told, anyone can benefit from living a sober lifestyle. It is important to remember that alcoholism is progressive and that the sooner it is addressed the better. There is no need to wait until hitting rock bottom before quitting. Ask any person who has hit rock bottom and most of the time they will tell you that they wish they had quit sooner. While we can’t change our past, we can certainly change our future.

If you or someone you know are experiencing the following types of problems from alcohol then it may be time to consider making some changes.

1. The need to drink more to achieve the same results.

Increased tolerance is a telltale sign of addiction when it comes to any sort of drug—not just alcohol. If you are needing more alcohol than usual to feel a buzz then chances are you are already on the road to becoming addicted.

2. Drinking habits that have begun to interfere with your work, school or family responsibilities.

Being late to work, slipping grades and missing family functions due to alcohol use are all red flags. If you are finding it more and more difficult to maintain your responsibilities because of your drinking, then it is turning into a problem.

3. Experiencing negative consequences from drinking but continuing to use alcohol anyways.

Driving under the influence, getting in fights and experiencing legal problems due to alcohol use are not “normal” side effects for people who drink responsibly. Sometimes people will make mistakes while under the influence but are then able to learn from them and not continue risky drinking behavior. A person who has a problem with alcohol will continue to drink despite the negative consequences it is creating in their life.

4. The loss of interest in other activities that do not involve drinking.

When alcohol becomes the main source of entertainment in a person’s life it is no longer being done in moderation. When a person begins to lose interest in things that used to give them joy in favor of drinking, then they have already begun to develop a problem with alcohol.

Blackouts or loss of memory while drinking occurs when a person’s blood alcohol content rises too rapidly for their body to keep up with. During this time a person appears to be conscious but is unable to form memories of their actions which can be a particularly dangerous situation to be in. If you are experiencing frequent blackouts while drinking alcohol, this is a sign that you are drinking too much.

6. Hiding the amounts of alcohol you use from family or friends.

When a person is drinking more than they know they should they will often lie about how much they are drinking—either out of shame or as a way to avoid judgment. If you are finding that it is difficult to be honest about how much you are actually drinking, then it may be a good idea to take a closer look at your drinking habits.

7. Experiencing cravings when you try not to drink.

Cravings are another red flag that signals an addiction is either developing or already established. Finding that it is difficult to stop drinking may very well be a sign that you probably should stop.

8. Negative impacts on relationships because of alcohol.

When alcohol begins to have a negative influence on a person’s relationships it has become a problem. Unless you are ok with cutting ties and burning bridges in order to keep drinking, the sooner you can stop the easier it will be to repair the damage that has been made.

9. Spending too much money on alcohol.

When a person begins to spend money they shouldn’t on alcohol or experience financial problems from their drinking, it has developed into a destructive habit.

10. The development of physical dependence on alcohol.

If you experience withdrawal symptoms when you try to stop drinking, then it is time to look for professional help in order to be able to safely detox from alcohol.

A person does not need to have all of these symptoms in order to have an unhealthy relationship with alcohol. They may have only a few here and there or they may have more than what is on this list. The important thing to remember is that if alcohol is having any sort of negative impact on you or your loved ones, it would be a wise decision to reevaluate the role that it plays in your life.

alcohol abuse alcohol addiction alcoholism Distinctive Signs of Addiction Am I An Alcoholic? Am I Addicted? Signs of Alcoholism Knowing When to Get Help
AUTHOR

Myth: You Have to Be an Alcoholic in Order to Have a Problem with Alcohol

I’ve heard this time and time again from people and it is usually in the context of somebody trying to downplay their unhealthy relationship with alcohol. Sometimes people will try to defend their drinking by saying they aren’t an alcoholic and they can stop any time they want. 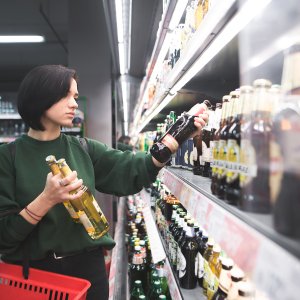 Signs that a Loved One Might Need Addiction Treatment

One of the most difficult things a person can go through is watching someone they love struggle with addiction. Sometimes it can be hard to know when it is time for a person to go into treatment.