Hepatitis C Rates Have Tripled in Only Five Years

According to the Centers for Disease Control and Prevention (CDC), the rates of new infections from the Hepatitis C Virus (HCV) have nearly tripled over the past five years and have reached a 15-year high.

The CDC also suggests that since nearly half of the people who are living with the virus don’t yet know they have it—due to not having symptoms—these numbers are probably higher. The annual number of new cases reported went from 850 in 2010 to 2,436 in 2015. Taking into the consideration that new cases often go unreported the CDC estimates that the true number for 2015 is actually closer to 34,000.

Although the infection is often treatable early on, if left unchecked it can become deadly. Reports from the CDC state that almost 20,000 Americans died from HCV related causes in 2015 alone. In 2007 mortality rates from HCV surpassed those of Human Immunodeficiency Virus (HIV).

When left untreated, HCV can lead to liver failure, cancer or cirrhosis of the liver. A person can have the virus for years without displaying any symptoms which is why testing and screening for at-risk individuals is so important.

Symptoms of HCV include:

The reason behind the explosion of new cases is due to the increased amount of intravenous (IV) drug use. The odds of contracting HCV or HIV increase substantially when a person begins to inject drugs. A study published by The American Journal of Epidemiology found that most IV drug users will get infected within the first two years of initiating IV drug use.

“Since 2012, there have been more deaths due to hepatitis C than all 60 of the other reportable infectious diseases combined.”

The National Institute on Drug Abuse (NIDA) reports that “Since 2012, there have been more deaths due to hepatitis C than all 60 of the other reportable infectious diseases combined.” One study reported that each person who injects drugs infected with HCV is likely to infect about 20 others and that this rapid transmission of the disease occurs within the first 3 years of initial infection.

What many people don’t realize is that these infections can be spread by sharing any equipment used for IV drug use, not just needles. Another contributing factor to this growing problem is that drug addiction leads to a decrease in judgment and inhibitions. A person who is experiencing intense cravings is far less likely to rationally think through the consequences of sharing needles or injection equipment than someone who was in their right mind.

Due to the increased rates of HCV and HIV infection among IV drug users, it would make sense that addiction rehabilitation centers would provide testing for these viruses during the admissions process. Unfortunately, recent research published by the journal Health and Affairs concluded that in 2017 only 27.5% of 12,166 substance abuse facilities reported that they offered HCV testing.

Testing for the virus is relatively inexpensive and the success rates for HCV treatment are higher when the disease is caught early on. Because of this, it would benefit the entire community if more facilities offered testing and screening for HCV and HIV to clients who enter their programs. This has become a serious health problem for far too many people and should be treated as such.

The Rates of Improperly Disposed-of Used Needles Are Increasing

An unfortunate side effect of the addiction problem across the United States is the increased rate of improperly disposed of needles in public spaces. 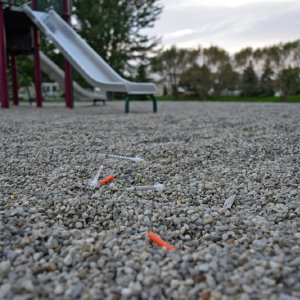